General overview of the service:

Nasal polyps are pale grey round swellings. In the nose they are formed when areas of the lining of the nose cavity become swollen with fluid. If the polyp is found on one side only and is pink and fleshy in appearance, then it might be malignant (cancerous). Polyps can interfere with breathing. The first indication is usually a blockage in the nose. This is often accompanied by persistent sneezing and a runny nose. Very mild cases may be treated with the appropriate medication, but otherwise a polypectomy is needed.

How the service is done:

A nasal polypectomy is an operation to remove polyps from within the nose. It is done through the nose, so you won’t have any incisions on the outside. There are 2 main techniques for removing nasal polyps. The technique chosen depends mostly on where the polyps are located in your nose. If they are easily seen and reached from the front of your nose, then you will have an “intranasal polypectomy” using small graspers. If the polyps are smaller and located in the roof of the nose or in the sinuses, an endoscope will be used to get a better view of the nasal cavity in a procedure known as an endoscopic nasal polypectomy.

What methods are used:

If the polyps are to be removed then a local anesthetic is sprayed into the nose, after which an anesthetic paste is applied to the nasal membranes. A wire snare is inserted into your nose and around the polyp. The snare is closed and the polyp snipped from its base. More extensive polypectomies will have to be carried out under general anesthesia. Again it should be possible to go as an outpatient, as a hospital stay is not normally required. The procedure to remove the polyp(s) is similar to that described above. Any suspect polyp will be sent to the pathology laboratory for analysis.

Follow-up treatments or next steps:

In some cases, you will go home the same day, but be prepared to stay one night in hospital. You should not drive after your operation, so you will need to arrange for transportation from hospital. You will require at least 2 days off work, although most people take 1 week off work to recover. For the first month after the operation, you should use a nasal saline (salt water) to rinse your nose. You will be instructed on whether you need antibiotics or other nose sprays. Usually you will need to make an appointment to be seen again to check how you are doing. 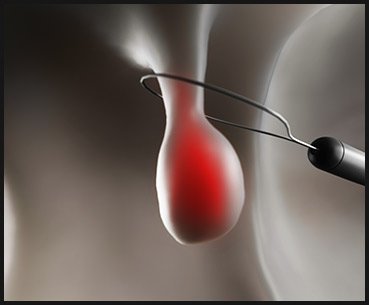 Dr. Bryan Friedman is a practicing Otolaryngologist (ENT) with extensive experience handling sinus-related conditions. Although he practices all aspects of ear, nose, and throat treatment and surgery, Dr. Friedman has developed a special interest in innovative In-Office Balloon Sinuplasty.